Last term, the school had their very own Olympics. Everyone enjoyed it.

Thanks to some of the kids from room 18 for making the event happen. They made it fun and included everyone.

We were put into teams and represented a country. Then we all went to a different station and played as well as we could.

How the event works:

Some of the games that were played were:

Then at the end of the event the lucky winners were announced. First was Spain, second was Mexico and third was Germany. Great job to all the people that were in one of those teams.

Here is some questions about the event:

There was great success that came out of the day. The schools hopes this will happen again. 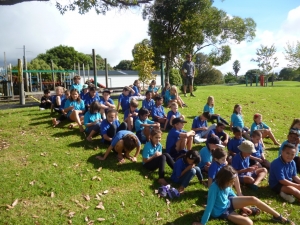 The school is sitting down while the teachers and some room 18 students explain how the event will work.

About the Author: Amara Cameron-Green

My name is Amara and I am a year six my favourite things to do are horse riding gymnastics and swimming. I like onerahi primary and my teachers.